Well, we were all looking forward to our twice yearly trip to the Royal Eastbourne Golf Club at Sunny Eastbourne. The days leading up to the match were unsettled and on the day the forecast was not encouraging. And it turned out to be positively discouraging.

13 (lucky for some? – not this day) golfers of all shapes, sizes and abilities turned out, having one thing in common, all having attended Eastbourne Grammar School. Their education must have been somewhat lacking in common sense as they all chose of their free will to venture out on a very damp and gloomy morning. You could understand if it was 50 years ago on a cross country run and Graham “Gerry” Marsden was lurking somewhere on the course to check you weren’t taking short cuts, but it was a friendly game of golf between old school pals. Obviously the character building at school was enough to instil sufficient backbone in the entrants for all to finish the round, some with reasonable scores, considering the conditions.

The prized cup had been refurbished with a new engraving plate as the other had been filled up with David Lockyer’s name and there was no room for any others. But it wasn’t to be for David this time. Max Snow, in what your correspondent thinks may be his first entry in the competition, became the new proud holder of the trophy with 32 stableford points. He tried to claim 34, risking disqualification, until he realised that the slope rating for the Royal was less than his home club so reducing his Playing Handicap. (Authors note : If this is too technical for you, in the immortal words of Glyn Williams, “Just look it up, boyo”. Those who studied biology will understand this.)

In second place with 31 points, John Bateman elbowed David Lockyer, also on 31, into third, having a better back 9 holes than his opponent. Close behind, match organiser Dave Jeffery took the fourth spot from Malcolm Manton, both playing off 18 and both with 30 points, on countback. The other entrants, all deserving a mention in despatches after their bravery in the field, follow in order but to avoid embarrassment to some, and one in particular, the scores will not be mentioned; Chris Shadwell, Mark Rayner, Don Seabright (how many shots did it take to get out of that bunker on the 8th?), Howard Longton, Adrian Wood, (sorry Adrian, your correspondent omitted to read Adrian’s name at the presentation but he was too polite to mention it until we realised there was one bottle left on the windowsill), Bob Reid and David Platt.

Post match we all dried out, had a few drinks (hot) and some sustenance from the bar before David Lockyer, (he didn’t want to let it go), presented the Cup to Max to a round of applause and banter, most of which was good natured. A get together in the Lamb, organised by Richard, followed later in the day but I have no news of what went on. I checked the local paper to no avail, but it seems the reputation of the school remained unsullied. Thanks to REGC, Dave Jeffery, Don Seabright and Howard Longton. 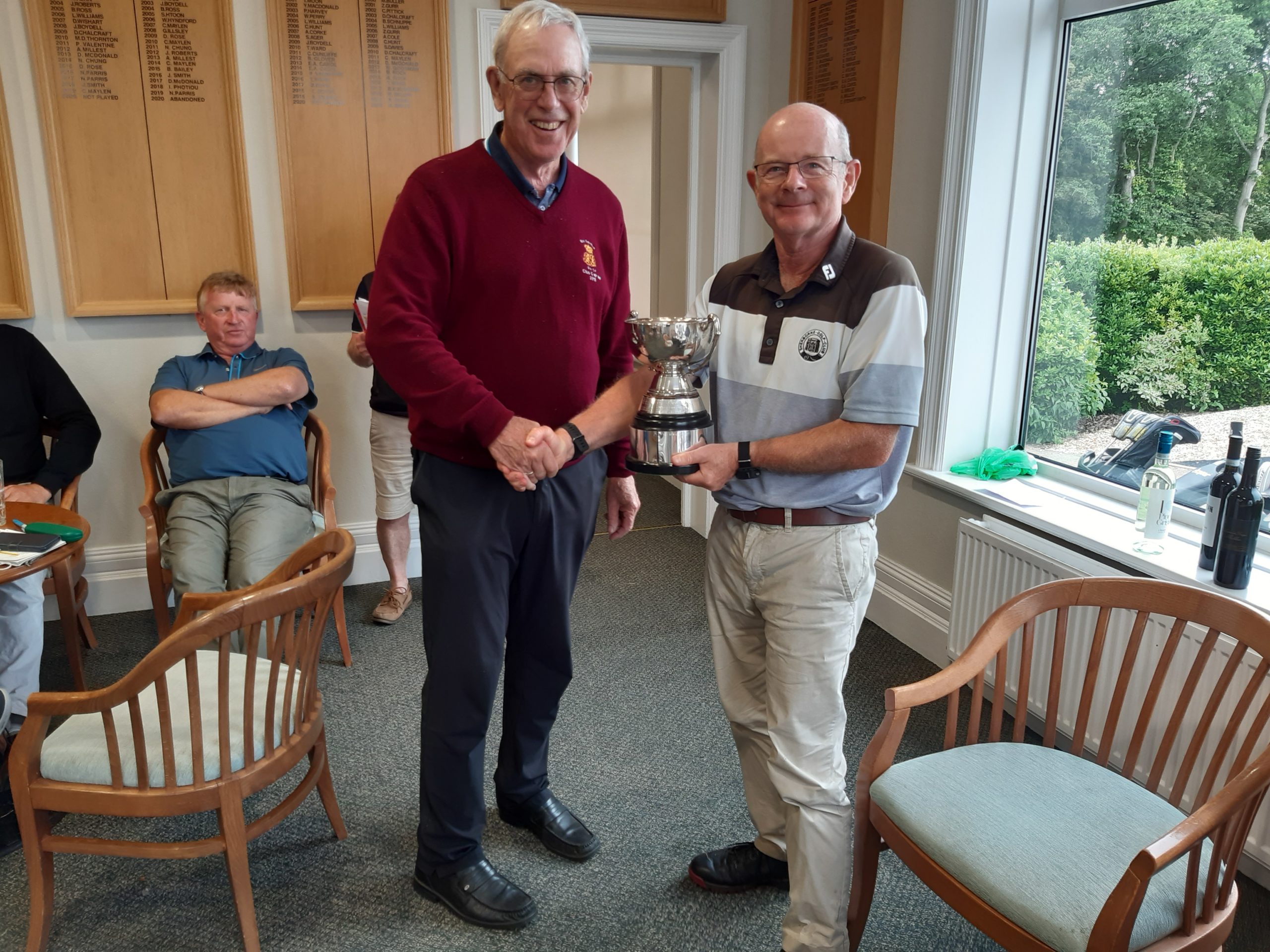