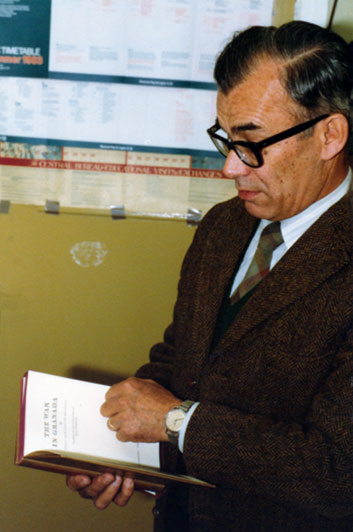 Walter Tillyard was born in London in 1922, and his early years were spent with his family in university towns where his father was a Professor of various languages, including the University of Cardiff where his father was Professor of Greek. He took his Higher School Certificate at Penarth Grammar School, where he represented the school at rugby and athletics, and then entered Cardiff University to study languages, History and archaeology.

Walter’s academic life was then interrupted by war service, and the following piece is his own recollection of those times.

“Sept ’41: “Took the King’s shilling”, i.e. volunteered. Assigned to a north country infantry regiment but allowed to complete the year at Cardiff University (which included one lecture a week on Welsh History). Came home on first day of third term to find call-up papers to Royal Signals, Prestatyn Holiday Camp. Trained there and in Huddersfield, living in a disused woollen mill in the centre of town and training in the Old Library. Rank: Unpaid Lance Corporal with duties as Guard Commander i.e. of sentries at one of the places guarded at night. Turned down officer training because, after a year in the science sixth form, I did not think I’d make a good Signals officer: a mistake.

Aug. ’42 Interview in Whitehall in English, French and German. Told I’d be sent to Winchester to join Field Security and would be taught to ride a motorbike and fire a revolver. Alas, Royal Signals blocked this – I was too far gone in my training.

Dec.’42 Sent to join “Phantom” i.e. G.H.Q. Liaison Regiment. Told I was very lucky – I still think so! Delighted to be on Richmond Hill with its lovely views and Richmond Park only yards away where I used to stand sentry and listen to the deer coming close through the mist. If asked what P stood for, we were to say “Phantom” and no more.

Jan. ’44 Sent to L Squadron stationed in Dollar, Scotland. Troops in Scotland were there to give Hitler the idea that we might invade Norway – he kept several thousand men stationed there. If they had been in France in June??? I loved being there – never fitter.

June ’44 “We’re in!!!” Back to camp, start packing. My job to charge all the squadron’s batteries for their radios. Portsmouth. Long delays – squadron went to Normandy bit by bit. My Scots colleague sent to A Squadron when I went to L. Went in on D-Day – in Normandy on a hill west of Bayeux, near road to St.Lo and not very far from Monty’s H.Q.

Sept. ‘44 Waterloo, Belgium. Regimental H.Q. in Club House of local Golf Club, north of the battlefield of 1815. We lived in a wooden hut not far away. Greeted on arrival in the village with “Would you like a cup of tea?”. Result: civilian friends throughout my stay.

Jan. ’45 Sent with a driver to contact a Phantom patrol in Luxemburg. Asked Americans for directions in the city. Sent north and out of town. Snow and distant gunfire ahead. Arrested by Americans in next village and interrogated. Got to patrol the next morning and on way back near Liège saw my first doodlebug.

8 May 1945. Previous night on a hill just in Germany, distant Dutch lights visible. Sentry Duty memorable for the nightingales in nearby woods. Soon moved east to Bünde, a small town in Westphalia; pleasant location. Asked to use my German a few times.

1946 Posted to 7th Armoured Division (the Desert Rats), still in Westphalia. Pleasant enough but little to do; mended the Colonel’s electric razor! Should have been demobbed but held back; no reason given. It took a letter from the SeniorTutor at Emmanuel College, Cambridge to get me out by Christmas.

Following demobilisation, Walter attended Emmanuel College, Cambridge, studying History, and representing the College at rugby (playing at hooker). Following graduation, he attended Bristol Teacher Training College for one year. His first teaching post was in 1950 at Shrewsbury Priory, a state Grammar School, where he stayed until 1957. In 1958, he moved to Eastbourne Grammar School, under Headmaster Rex Shaw who he enjoyed working with, teaching mainly German, with some History and Biology. His History lessons have been noted – by son Rob – as entertaining! He was also an excellent shot with a wooden board cleaner. Walter was not ambitious to go for senior management roles as his first love was always teaching. .

With his service background, Walter supported John Mallion – whom he succeeded as Head of German in 1960 following the latter’s move from Eastbourne – in running the CCF, taking command in succession to Major Reid in 1962. The following is a memory from a grateful pupil (who later committed the ultimate sin of joining the “Senior Service”):

“Captain Walter Tillyard was the Officer in Command of the Eastbourne Grammar School Combined Cadet Force (CCF) and he led from the front with great enthusiasm and proper military discipline. In 1963 the CCF unit moved into the new CCF facilities in Kings Drive with thriving Army and Air Force Sections. The Air Force Section was led by Lieutenant George Dixon. As a member of the Army Section, the writer was not exposed to the kinder, gentler goings on of the Air Force Section such as gliding courses, but rather to dashing around in the rain at the margins of the playing fields, on the South Downs and at annual training camps carrying a World War 1 vintage .303 rifle and various item of kit.
Captain T. led from the front, always immaculate whether on parade or in the field, his orders were delivered in short staccato terms that required immediate compliance! Captain T. was in his element at the annual CCF camps – I recall trips to the Army Training Centre at Pirbright in Surrey and St Martin’s Plain outside Folkstone – where he was immersed once again in the full-time Army and a member of the Officer’s Mess. Captain T believed that the role of the CCF was to provide a Service background to all cadets, develop qualities of leadership and resourcefulness, and a sense of public service. He and his leadership team succeeded on all fronts.”

During his time at EGS Walter was a keen violinist in the School Orchestra; he also gave careers advice to those whom Rex Shaw had deemed were not candidates for Oxbridge! He was also one of the teachers assigned to Cavendish House. In 1984, following the changes at what had been Eastbourne Grammar School, Walter decided to apply for a job at Lewes Old Grammar School, teaching German, and he retired from there in 1991.

In retirement, Walter had many interests including playing his violin in local orchestras and string quartets, singing in choirs, and maintaining contact with former colleagues including Mike Morley, Bob Wisden and Frank Collet. A keen fruit and vegetable gardener and dinghy sailor, he is surrounded by books at home, mainly history, biographies and Greek culture. He loves travelling and, in 2010, bought a cottage in France, in which his proudest possession is a well-used workbench: never an idle moment in his life! A speaker of five languages, Walter maintains a keen love of all things European. He was also a keen, long-standing contributor to U3A in Seaford, where he has lived for many years, and a welcome attendee at EOGA annual lunches

Approaching his 100th birthday in April 2022, Walter can certainly look back on a career in which his positive influence and professional and personal standards endeared him to colleagues and pupils alike. His has been a life lived to the full.