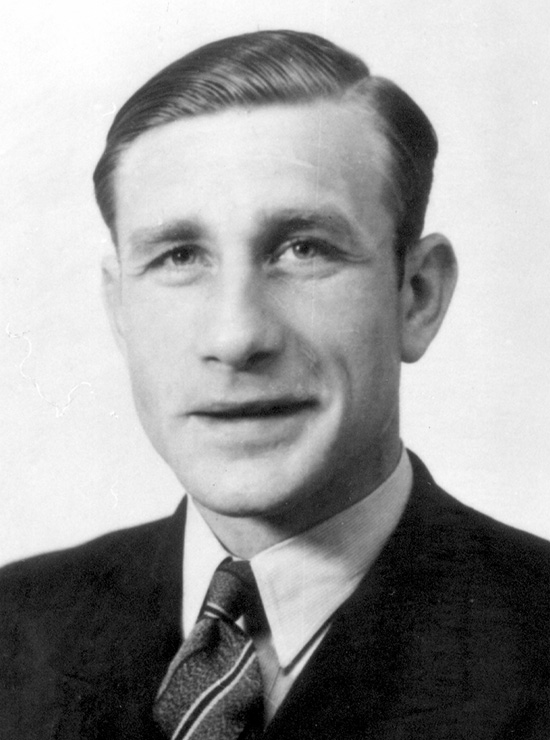 A ‘larger than life’ character he had a considerable influence as PE, Games and Woodwork Master. Things were rarely quiet when he was present! Pre-war he worked in industry as a maintenance engineer in his home town of Wolverhampton. He joined the RAF under age, rose to the rank of Warrant Officer and parachuted from a burning plane to spend the remainder of the War in captivity. He returned home in a wheelchair but recovered sufficiently to regain his pre-war skills as goalkeeper and to represent Bournemouth FC in the first post war season.

He decided on a change of career and entered Teacher Training College at Eastbourne, initially joining the Grammar School as a PE teacher but switching to the Handicraft Department in his late thirties . A man of firm conviction on any subject, he relished discussion and argument not least on the football field where he represented Eastbourne Town with distinction for many seasons. Good judges said he would have represented the England Amateur XI if he played for a London side. Boys respected him, recognising that they would ‘get a square deal’ and that there was no malice in his occasional booming anger; they enjoyed the time and care he gave them. Many Old Boys visited him in School and his home to his great delight.

He willed and coached himself to proficiency in Cricket and Golf, encouraging boys as he did so. He was an endearing character with many virtues but not fond of change; he died in the last year of the Boys School and one wonders what the girls would have made of him and he of them. His open friendly avuncular manner would surely have pleased them.

Prompted by reading the above about his uncle on the old EOGA website, his nephew John Mallen provided the following reminiscence:

Bob Mallen was my father’s younger brother – one of a family of five brothers and two sisters – and always Harold to the family. He was inspiration for my own career in teaching. He and my father had been in the same convalescent home in Herne Bay after the war, and Harold decided to take up the Government’s offer of emergency teacher training from where he must have gone straight to a post at Eastbourne Grammar School.

He had joined the RAF during the war as a bomber navigator and had been shot down over Holland in, I think, 1944. Initially rescued by a Dutch family he was captured by the Germans. He never spoke of his war experiences to me but did often talk of his great love of teaching and of EGS. After my father’s death in 1958, it was his influence that encouraged me into further education, university and a career in teaching which ended in 1993 when I retired from the post of Director of Schools & Colleges for the London Borough of Croydon.

I have a lot that I owe to my uncle Harold’s inspiration. It was gratifying to know from your website that I was not the only person he influenced and encouraged. He was very glad when I started teaching in 1963 – but perhaps less enthusiastic that this was in a comprehensive school!