Within 20 years of its foundation the School had already moved three times. However, none of the accommodation used was ‘purpose built’ and many logistical difficulties were encountered. In 1919 the School moved to Eversley Court, its ‘home’ for over 40 years. Even here, despite the addition of a ‘new wing’ in 1930, the outdated specialist facilities were considered inadequate for the new era of secondary education. In was only in 1962, with the move to a new site in King’s Drive, that the School was housed in ‘purpose built’ premises. 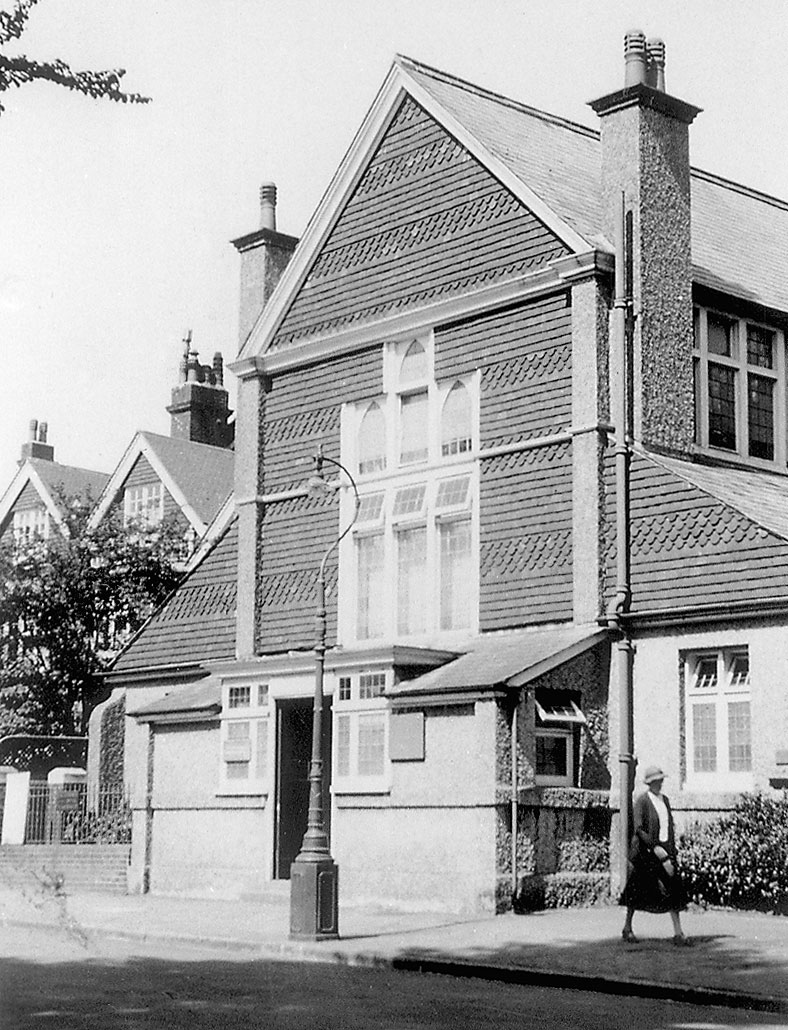 This was previously a Church in Saffrons Road comprising a large hall (nave) with a slightly raised platform at one end (chancel) and two adjoining small rooms (the vestries). The accommodation was adequate while pupil numbers remained low, but they had increased to 100 by 1903.
The Head later reported “that all classes were held in one room; if anyone entered his ears would be assailed by a medley of French and Latin phrases, (not always accurately pronounced) geometrical and geographical terms, whilst his nose would be affected by odours arising from chemical experiments”. 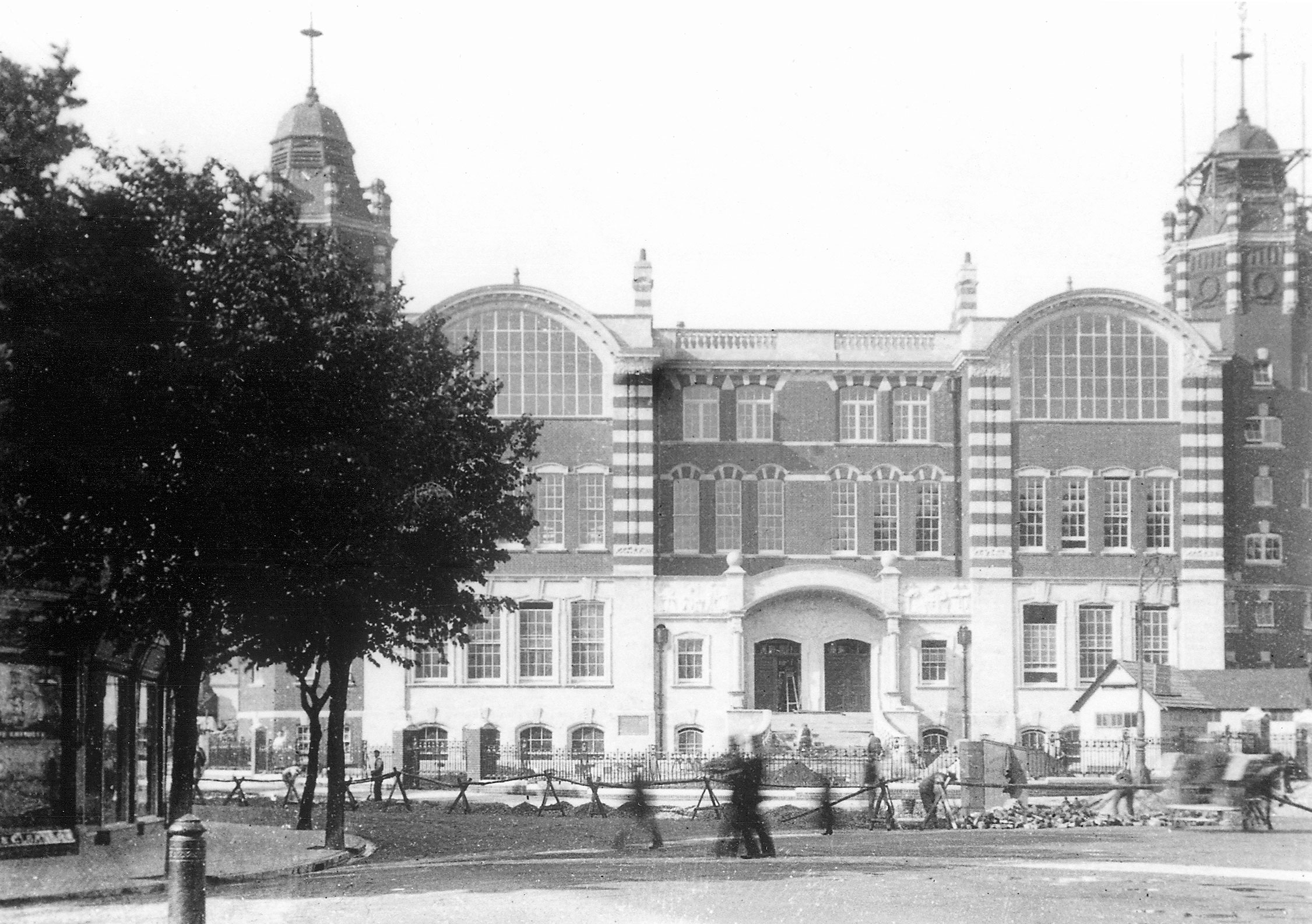 Built on land at the bottom of Grove Road given to the Borough by the Duke of Devonshire to be used as Municipal Library and for educational purposes, the Institute was officially opened in August 1904. Moving the School to occupy the whole of the second floor satisfied the Duke’s proviso and provided substantial and well-equipped accommodation. Games were played at Hampden Park on Wednesdays and Saturdays, but pupils had to walk the streets at ‘playtime’, and ultimately seniors and juniors were obliged to follow certain prescribed routes, thus preventing the congestion in Grove Road which had been a source of vexation to the Headmaster and others! Proximity to the Railway Station extended the catchment area of the School outside the Borough boundary as far north as Heathfield; thus ‘County’, one of the final four Houses of the School was ‘born’. The phenomenal growth of the School in the period to the end of the War (1918 – 235 pupils) meant it was imperative that new accommodation be found. 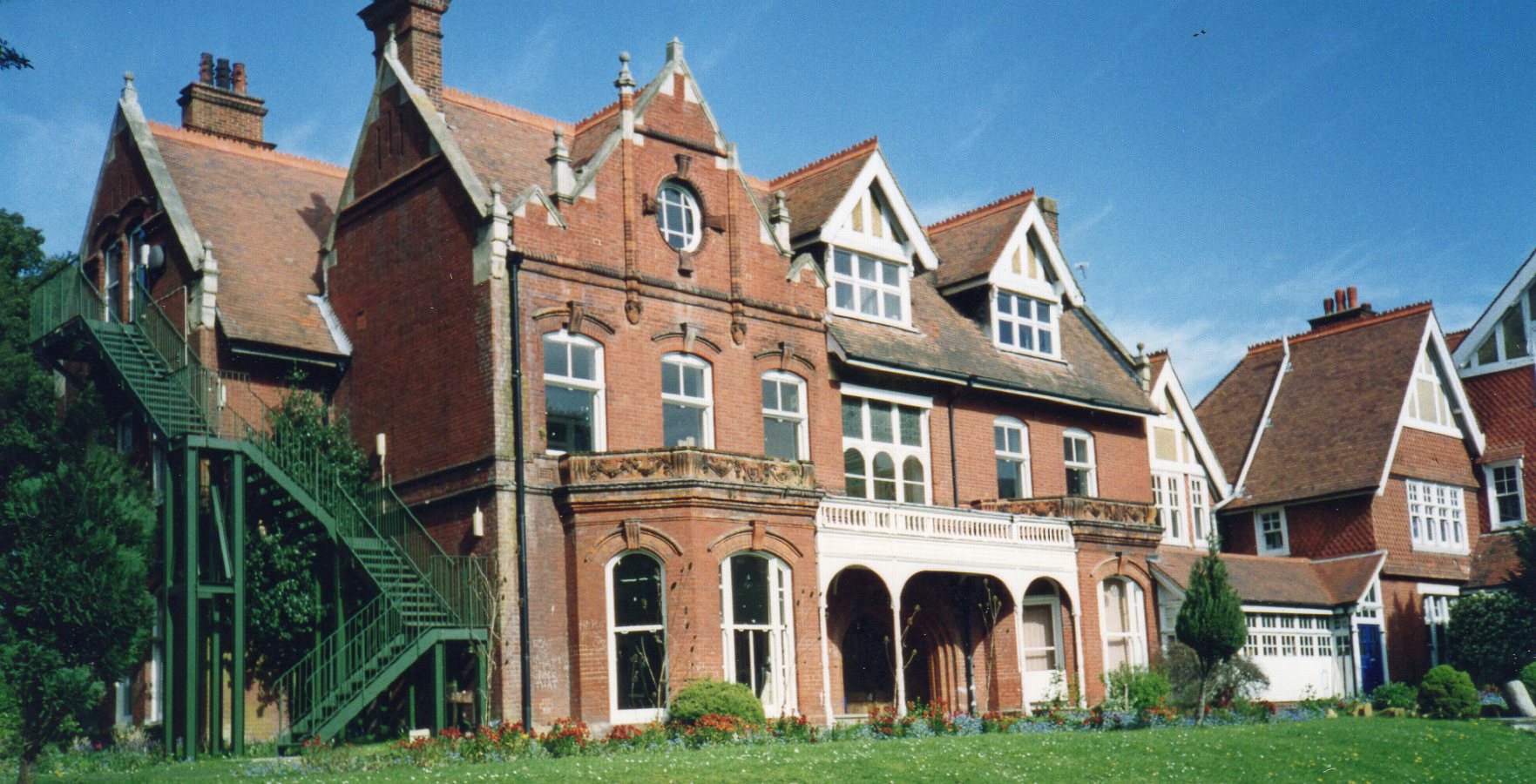 This very large building built on a hill-top site to the north of the Town Centre was bought for £9,250 by the Borough Council who spent an extra £4,500 on adaptations and furnishing. First built as an Edwardian family home it became a prep school (Ascham) which located elsewhere and Royal Navy Air Service quarters during the World War 1. An inspection by the Board of Education commended the wisdom of the Council “who had provided beautiful surroundings conducive not only to good health but to better work”! In the absence of specialist facilities, the timetable had to be constructed to allow boys to travel to the Art School and the ‘old’ Science labs in the Technical Institute. In due course small extensions provided a Gymnasium and Workshop and a Library and Art Room developed internally. However, there were no facilities for Science Labs or an Assembly Hall until 1930, when a new wing was constructed and according to the Head “the Labs were admirably planned and equipped whilst the Hall, although not as large as we would have wished, was acoustically perfect”. Games still took place at Hampden Park and a playground (and drill square) was provided by asphalting over a grass area; the other grass area was ‘out of bounds’ and provided an attractive area with mature trees as the backdrop.

During the early part of the Second World War the School shared its premises and facilities with a School from London; but the sudden appearance of enemy forces on the French Coast sent the School into hurried temporary exile to Hitchin (Herts) where it shared the premises of the Boys Grammar School for 21/2 years.

At the end of the War Eversley Court, once occupied with such delight, was becoming increasingly shabby and the facilities (small rooms, narrow corridors, outdated specialist facilities and no sports field on site) were considered inadequate for the new era of Secondary education following the 1944 Act. An inspection report in the early 1950s praised the working of the School but severely criticised the premises and inadequate conditions in which that work had to be done.
Following some years’ deliberation, a new site on completely open land off King’s Drive was approved in January 1957. Here for the very first time the School was housed in purpose-built premises, built in two stages, and officially opened in 1962, although as rooms became available teaching was gradually transferred there over a period of eighteen months previously.

The splendid new facilities surrounded by sports fields were enjoyed until amalgamation with the Girls High School in 1975 meant the end of the boys-only Grammar School after 76 years. With the beginning of the system of Comprehensive secondary education in the Eastbourne, the King’s Drive premises served as the town’s Sixth Form College from 1977 to 1993; the premises were then incorporated into a college developed on an adjacent site to provide a full range of post-16 education.  A video taken inside and above the King's Drive site when it was open to visitors prior to the Flagstaff Ceremony on 6th November 2021 can be viewed below: