School Foundation and Development to 1920

The School was established in 1899 as Eastbourne Municipal Secondary School for Boys (EMSSB), the founders being Henry West Fovargue, Town Clerk and a prominent local Methodist, and Revd Edward Hawkins, an Anglican clergyman who had wide experience of education and became the first Headmaster – a post he held until 1912. A parallel development led to the Secondary School for Girls being set up.

EMSSB was noteworthy as being the first school in England set up by a local authority to provide “Secondary” education to at least age 16 in an entirely new foundation and was thus important in the history of state- funded education. This was achieved by the founders’ creative use of existing legislation in advance of the Education Act 1902, in force from 1st April 1903, which provided for the promotion of education beyond age 14. In practice, a lot of children continued in the early 1900s to leave school at age 12, but it was recognised after the Great War that this needed to change leading to further legislation and regulation of a Grammar School curriculum. EMSSB was one of many schools which changed their name to Grammar School to reflect this development.

In the late 1890s there had been great demand in Eastbourne for the local council to provide Secondary education in the town at relatively low day-school fees, and it was to this demand that the founders were responding. A proposal subsequently emerged for a co-educational secondary school to be based at the new Technical Institute but, when the latter opened in 1904, the number of boys in EMBSS at Grove Hall and of girls studying in temporary premises in Grove Road exceeded the capacity of the Institute. The Grammar and High Schools and their predecessor institutions in the event remained separate apart from the short-lived combined School which was in existence from 1975 to 1977.

EMSSB was founded in Grove Hall in 1899 with a Headmaster, Assistant and 7 boys – one of whom, F Sayer, became the first of many to achieve a position of responsibility in the town, becoming Head Postmaster; he was awarded the MBE for his services during the Second world War. By 1903, numbers had grown to 100 though the School was apparently little different to many of the Prep schools then in Eastbourne. The School moved to the Technical Institute in 1904 and by 1909 the number of pupils was 90, spread across five forms. 21 pupils were Scholarship boys while one-third of the remainder paid only half fees. An Inspector’s report at that time highlighted excellence of the education provided but slow growth in the School due to the level of fees and difficult site.

The EMS Magazine was first published in the Christmas Term of 1909. The Editorial, written by A Jolly (presumably the benefactor of the Arthur Jolly & Caffyn language prizes in later years?) included the following passage: “In addressing our readers for the first time we may be excused if we commence with a brief statement concerning the production of this magazine. It is not run for the benefit of any particular boys, but is a magazine for the School, and we hope that boys from all forms will contribute articles. Should any profits accrue, prizes will be purchased and awarded for articles contributed. We should like you to note that it is owing to the cost of setting the type for printing that we are compelled to charge a somewhat heavy price, but if our circulation increases, we shall be able to increase the size or decrease the price. The manager will be glad to receive any subscriptions (1/6 per annum) towards the cost of this magazine from Old Boys or others interested in the School.

We are sure that our readers will join in wishing the boys who left last term the best of luck in their future life. We should also like to give a hearty welcome to the new boys, of whom there are nine. This brings our number up to 91. We hope they will uphold the best traditions of the School.
This is, of course, the critical term of the year owing to the Cambridge Examinations. We sincerely trust that this year our School may once again gain the Duke of Devonshire’s prize. We are glad to say we experienced a fairly successful cricket season, as will be seen by inspecting the sports page. We hope that we shall have an even better football season.”

In 1911 the first ever School Sports Day was held, swimming after school in the Old Town Baths was launched with admission at the reduced rate of 3d for boys and the much-celebrated end-of-term concerts with performances by boys and staff were instituted. 1912 saw the inception of the Old Boys’ Society with monthly meetings; activities included community singing, debating, sports and an annual outing. During the year, C J Blackburn was promoted to Headmaster, and he obtained a reduction in pupil fees. By 1913 the School had some 150 pupils.

In the First World War only staff who were medically unfit were not required to serve; the Headmaster was assisted at this time by one full-time teacher and 19 temporary staff members. The Editor of the School Magazine in 1915 recorded that “Miss Varnier carried out her duties as well as any our former masters”. Meanwhile the Headmaster reported with some pride that many of those associated with the School had gained a Commission in the forces. The Cadet Force was established in 1916 and the Harvest Camp held at Sissinghurst until 1918 was, apparently, one of the first in the country.

The war years saw phenomenal growth in the number of pupils, which stood at 235 in 1918. The accommodation at the Technical Institute was by then over-stretched and in 1919 the School moved to Eversley Court. The School Library began in 1920 with a membership fee of 6d per term; the School also marked its 21st birthday with an Open Day for parents including a PE display, the performance of an Act from Shakespeare’s “As You Like It” and the first public concert by the new Orchestral Society. In a speech on the day the Town Clerk reported that the cost of educating each boy was £20 which include £9 paid by ratepayers “but (this) was not to be grudged”. Meanwhile the Headmaster was proud to note that 12 Old Boys were at University and that endeavours would be made to provide funding for Scholarships for those who remained at School until age 18 in order to secure University entrance.

A Grand Picnic held at Wilmington in 1920 was enjoyed by 240 boys, who made the journey by bicycle, on foot or by train. Following sports and other activities, the day finished with tea at the Thornwell Tea Gardens. 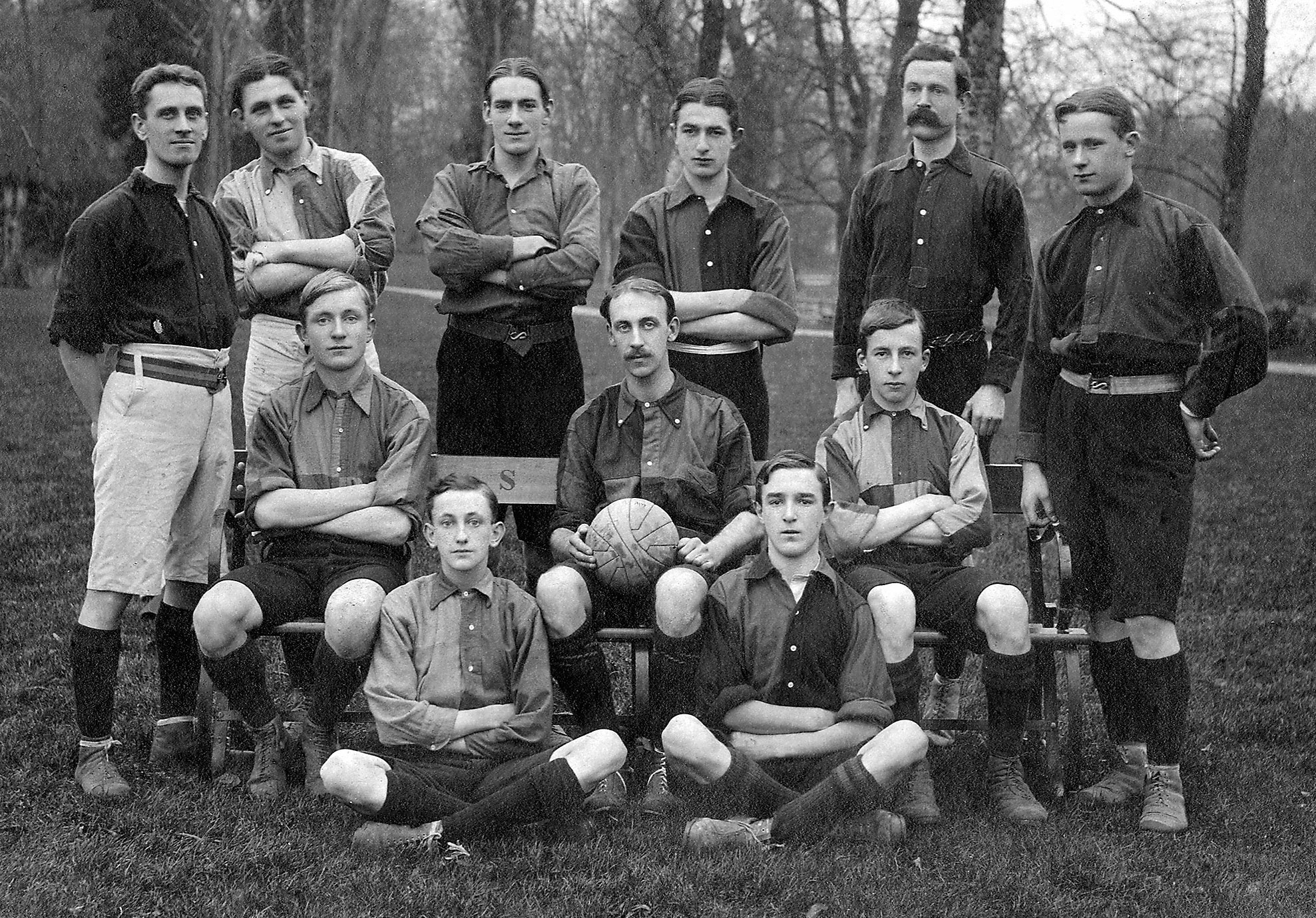 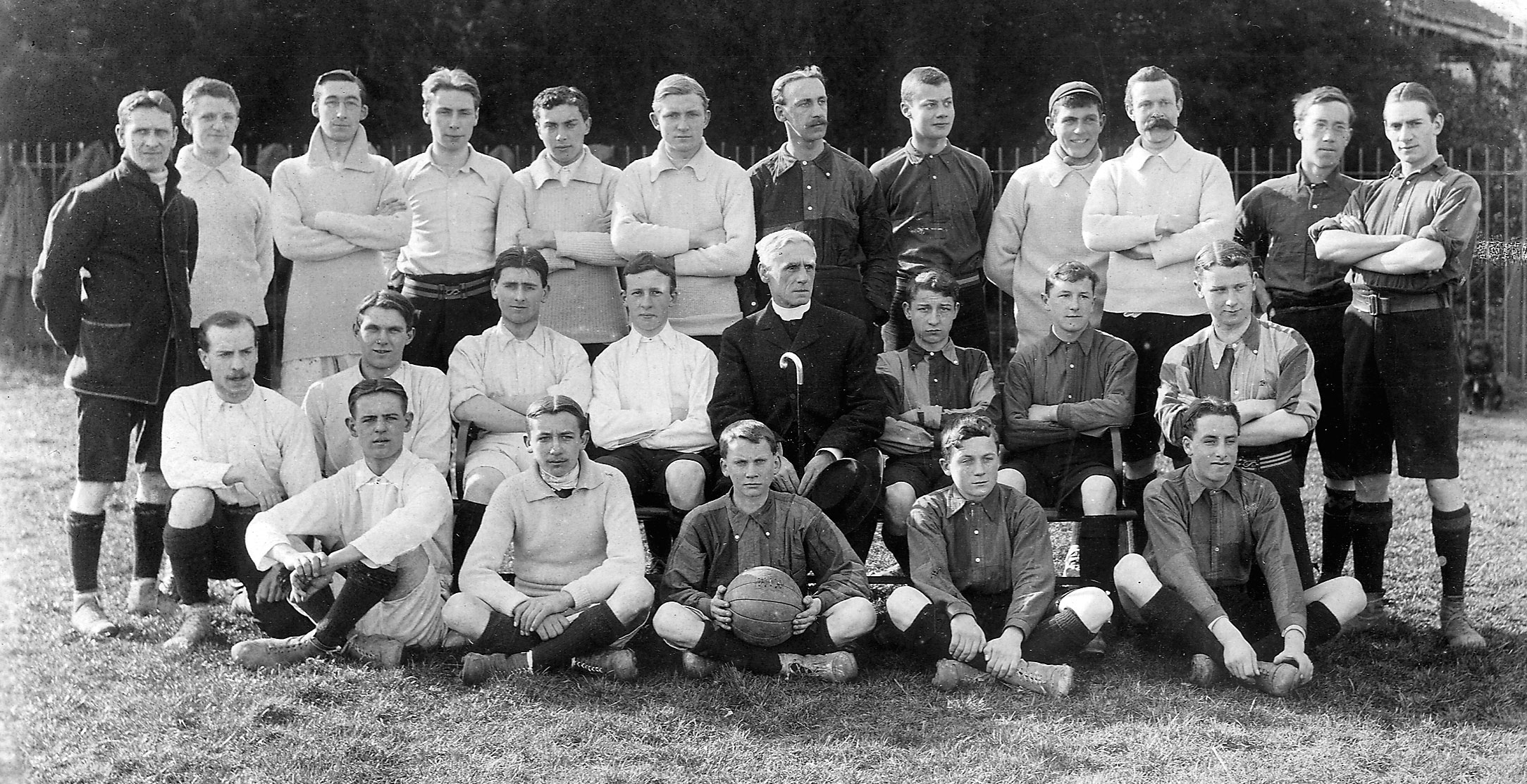 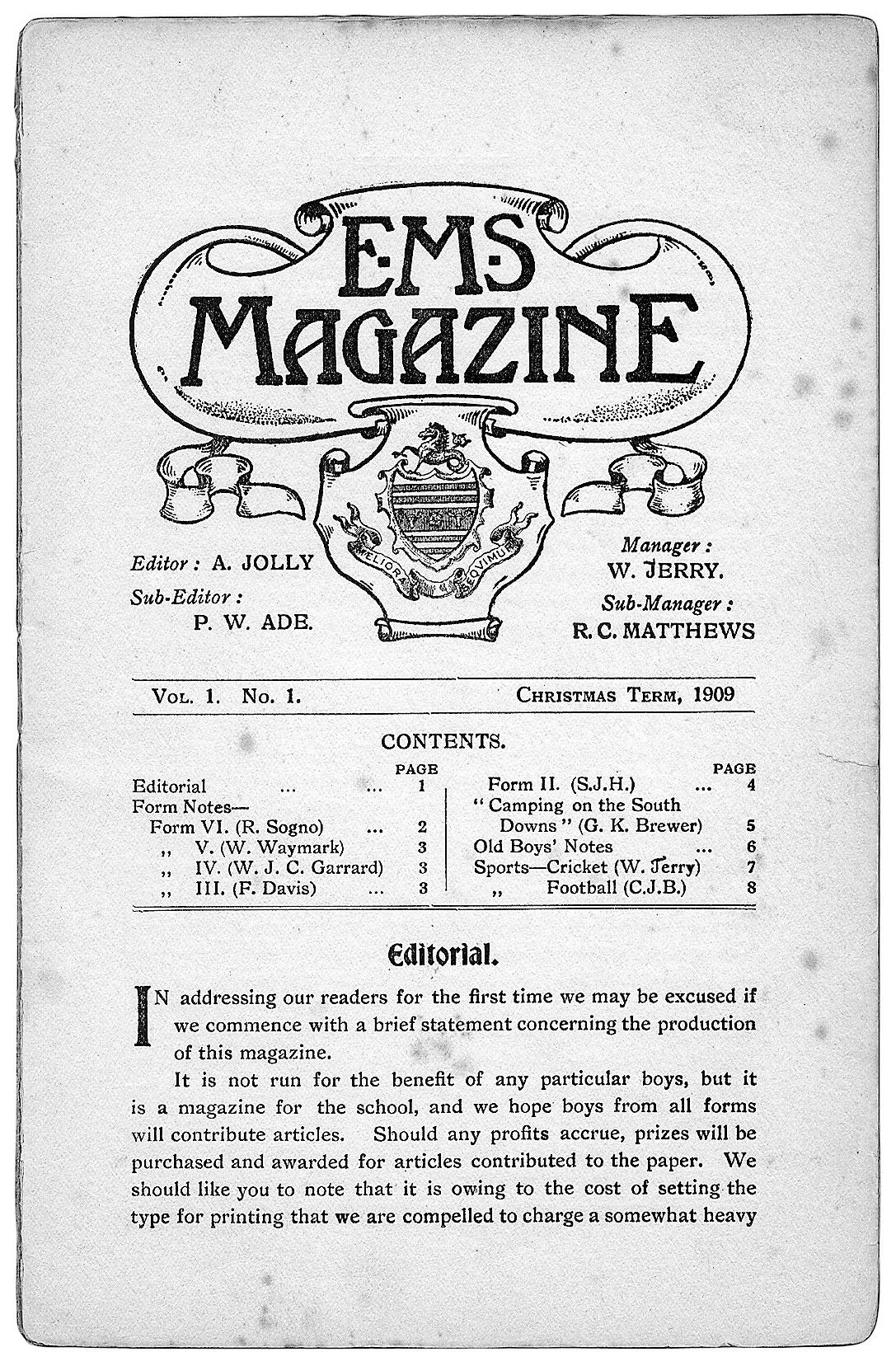 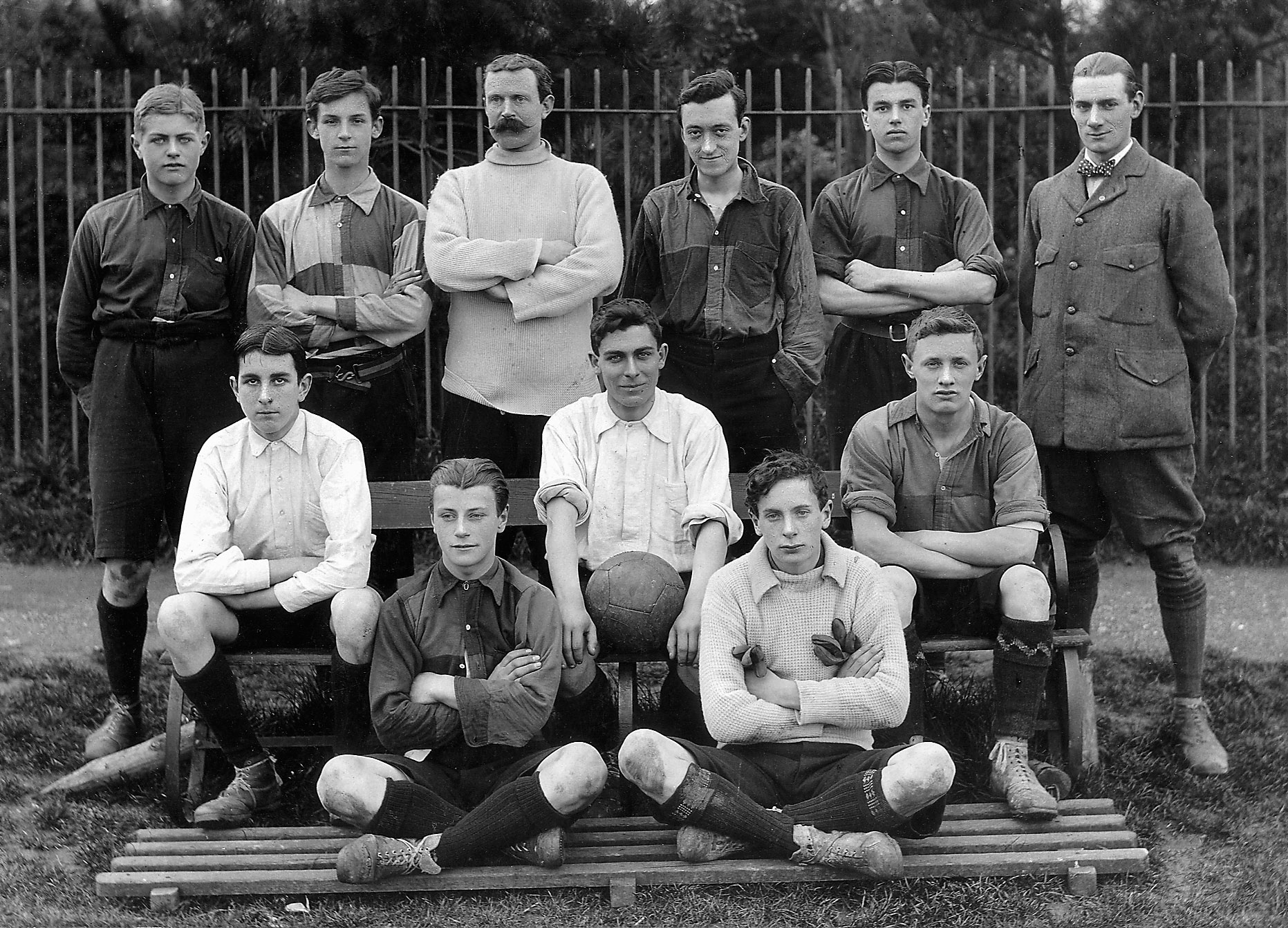 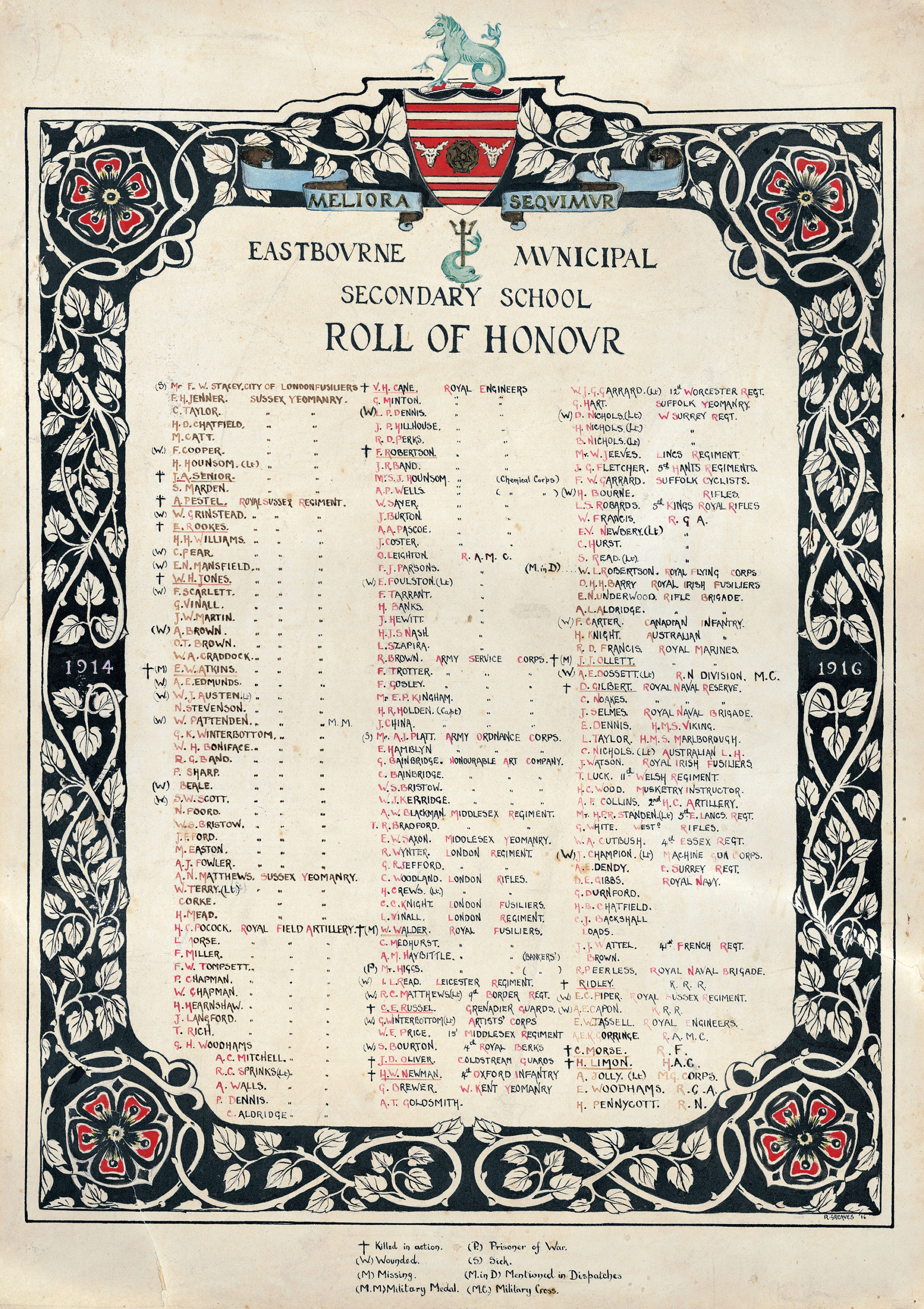